I recently received a complimentary copy of Montessori Madness! from our son’s preschool and I just cannot say enough good things about this book. It’s the first book I’ve read cover-to-cover since our son was born and I finished the entire book in less than 24 hours, so that should tell you something about how much I enjoyed it.

The book begins with a story about the author pooping his pants in the third grade. Unfortunately, this is a story I can really relate to. I peed my pants in the second grade. I was in the “slow” reading group and the teacher left our group to go work with some of the other kids in our class. We were instructed not to disturb her. Obedient student that I was, I didn’t — and I suffered the consequences (mostly humiliation). But reading Trevor Eissler’s book, I realized for the first time that this whole scenario could have been easily avoided if I had gone to a Montessori school where bathrooms were readily accessible whenever you needed them. In the past, I had always chalked this incident up to my shyness and blamed myself for not being more assertive about telling the teacher that I needed to go to the bathroom.

Of course, the benefits of a Montessori education go far beyond accessible bathrooms. Being at least somewhat familiar with the Montessori philosophy, a lot of the other topics that Eissler covers in his book weren’t really revelatory to me (for example, the idea of children working at their own pace with child-size materials or being in mixed-age groupings). But this book also caused me to reflect more on what I’ve always felt was missing from traditional education and how Montessori fills those gaps. Similar to Eissler, my husband and I had considered homeschooling our son, in part because we both had bad experiences in public schools. Of course, I realize that not all public schools are created equal, but there is also something about the whole way our educational system is designed that is very off-putting to me. A big problem I have with public schools today is the focus on testing rather than learning. I think that’s a huge mistake. 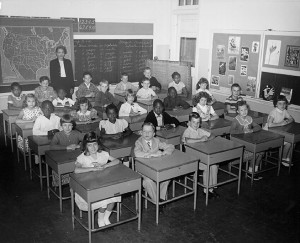 And it’s not just public schools. The pee incident I mentioned above happened at a Catholic school. There’s something about the whole system of establishing a teacher as the ultimate dictator that just strikes me as wrong. Teachers are not infallible. And it’s not fair to students to require them to all learn the same thing at exactly the same time. I know I’ve seen in my experience as a parent the incredible differences among children — some walk or talk much sooner than others, for example. We all develop at different rates and have different abilities and interests. Doesn’t it make sense to allow education to cater to those different needs and interests rather than trying to stuff everyone into a one-size-fits-most box?

Another thing that really struck me in this book was a quote from a student who had attended Montessori and traditional schools. Asked the difference between them, the student responded that in the Montessori school, the children did their work at school and at the traditional school, they did it at home. Because I’ve mostly been looking at preschools, I hadn’t really thought much about how the Montessori method applies to elementary schools before this book. But reading this student’s observation, I suddenly realized that not having homework would give our son so many more opportunities to do things that he enjoys after school — whether it’s hiking or riding his bike or playing the piano or learning Tae Kwon Do. We’d have more time to do things as a family and we wouldn’t have the power struggles with homework I’ve seen so many parents engage in with their kids.

Oh, and no grades! Learning for learning’s sake and not for extrinsic rewards — grades or otherwise. How wonderful is that? I was a straight-A student throughout much of my education, but I never felt like I really achieved much of anything. Perhaps if I had been able to focus on learning rather than my GPA, I would have learned more. I know I would have been happier. One of my hopes for our son is that he never loses his passion for learning, but above all I want him to be happy.

The bottom line is this: I would recommend this book to any parent, whether familiar with Montessori or not. I think there’s something here for everyone. If you’re already into Montessori, I have no doubt that it will confirm your feelings about Montessori. If you’re not a Montessori parent, it is all the more important that you read this book. You may not agree with everything in it, but I think it will give you a better idea of what Montessori education is all about.

What have you been reading lately?

Disclosure: This post contains an affiliate link. Thanks for supporting Our Natural Journey at no cost to you. For more information, please read my disclosure policy.

2 Responses to Montessori Madness! — a review