Home » Organic, Paleo » Why we eat what we eat

Why we eat what we eat

My journey to the Paleo diet began seven years ago when I met my husband. At the time, I was a recovering vegetarian (meaning I had given up vegetarianism but still didn’t eat red meat). My husband has celiac disease, and as our relationship grew, my relationship with food evolved as well. At first, of course, I maintained my usual eating habits. And then I realized just how difficult it is to prevent cross-contamination among gluten-full and gluten-free foods. I tried. I really, really tried. If I was making grilled cheese sandwiches, I’d make his first using gluten-free bread and then mine with gluten-full bread (sometimes in a separate pan). I’d wash my hands every single time I touched anything with gluten. But still, inevitably, he would get glutenized. I finally came to the realization that unless we bought a house with two kitchens, combining gluten-full and gluten-free just wasn’t working. I’d feel so bad whenever he was contaminated with gluten. And so we became a gluten-free household.

And after a while on my gluten-free diet I realized my diet was restricted enough without eating beef, so I started eating red meat again. Step two complete.

My husband, meanwhile, started experimenting with low-carb diets. First came the South Beach Diet. We tried that for a while and both lost weight but eventually we went back to our old carb ways (and our old waistlines). And then, shortly before the birth of our son, my husband started on the Paleo diet. He lost weight and felt better than he ever had and then parenthood hit us. Hard. Special diets went out the window (except gluten-free, of course), and we ate whatever we could whenever we could. And my husband gained back the weight he lost, plus some more. And then he gave Paleo another shot and this time my son and I joined him. 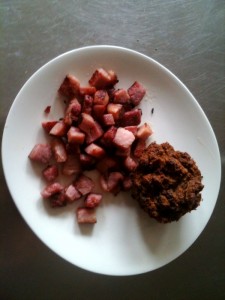 We’ve been on a fairly strict Paleo diet for about a month now (although I will admit that we are still eating through some of the old carbs and dairy products that remain in our pantry and freezer). I have to say my husband and I both feel a lot better, and I think we look healthier. We haven’t exactly dropped a lot of weight (and that’s OK for now), but I have noticed that my hair, skin and nails all appear healthier. But I think the biggest benefit to me so far has been the joy I feel in knowing that I am providing our son with healthy and nutritious foods. It is so nice to stand in the checkout line at the grocery store with a cart full of fresh fruits and vegetables, organic meats, eggs, etc.

If I could sum up the difference it’s made in our lives, it would be this: Other kids eat Oreos for a tasty snack, mine eats seaweed.

So that’s how we ended up eating Paleo.

How about you? What do you eat? Why do you eat what you do?