We bought new appliances, and they aren’t stainless

It started when our oven died last month. No worries, we thought, we’ll just replace it. It’s old anyway. While we’re at it, we figured we might as well replace our ancient microwave and get matching appliances. At the time, we had a black circa 1989 microwave and a white oven that I’m guessing was about 10 years old.

Unlike most people these days, our first thought was not stainless. Let me tell you a little something about stainless appliances. I do not understand the appeal. In my opinion, they give a kitchen a cold, institutional look. But more than that, getting stainless is usually more expensive than getting other finishes and stainless is harder to maintain, which I consider a huge downside, especially with a toddler in the house.

The other thing that bothers me about stainless is that it has become so pervasive in new kitchens. In the last 6 years, we’ve looked at probably at least 100 homes that we were considering renting or buying. Of the ones that had been remodeled recently, I can only think of one that did not have any stainless appliances (and that was the first house we bought, by the way). Time and time again, an updated kitchen meant stainless appliances and granite countertops. After a while, it gets so boring.

So for us, stainless was out. Neither of us liked white, and because we had recently painted our cabinets, transforming them from a lovely pinkish hue (remember when that was in?) to a dark chocolate brown, we didn’t think black looked very well with them (and because we had bisque (or should I say almond?), white and black appliances in our kitchen, it was easy to tell what didn’t work). Our best option was bisque. I know, I know. Bisque is so 1980s. But the thing is, I actually like bisque — it’s warm, inviting, even unique these days and it looks good with our cabinets.

So we ordered a bisque Kenmore range. When it arrived, though, I had to do a double-take. This was not the warm, creamy color I had envisioned. Oh, no. This was not at all like the bisque Kenmore refrigerators I had seen at the store. It was white. Maybe, if you squinted, you could tell it was barely off-white, but it certainly was not what I was hoping for.

And so, we decided to return it and get a different brand. We cancelled the matching microwave we had ordered to go with our new range and picked out a Whirlpool microwave and range. We picked up the microwave from the store and it was pretty close to the color I wanted. Definitely a bisque at least. So we installed it and waited for our new oven to be delivered. Since bisque is not very popular these days to say the least, it proved to be a long wait. In the meantime, we used the Kenmore oven without complaint.

And then, our Whirlpool dishwasher, which had just been replaced a year ago, died as well. We faced a dilemma — should we choose another Whirlpool and hope it doesn’t suffer the same fate or should we go with another brand and risk mismatched colors? We ended up deciding on a Kenmore because it was the nicest bisque dishwasher we could find (a good dishwasher is pretty close to a necessity in our household). When it arrived, its hue was somewhere between the new microwave and the Kenmore dishwasher, but I figured that since it was in another part of the kitchen, it didn’t matter that much. And I have to say, while it’s not the exact color I wanted, it is super-quiet and washes dishes wonderfully, so I was willing to sacrifice on the color a little to have the performance I wanted.

So there we were, with three different shades of bisque from two different manufacturers, but we were content with the performance of all of them. The microwave was better than the old one (although it has a few quirks), the oven was better (although it has a few quirks, too) and the dishwasher was dreamy (if a dishwasher can be such a thing). You can see where this is going, can’t you? 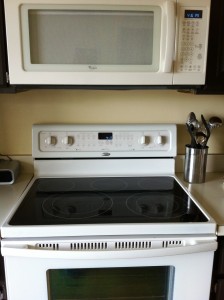 Not only are our Whirlpool appliances different colors, they can't get the time straight either!

On Wednesday, our new Whirlpool oven arrived. Mind you, I had chosen this oven based on the belief that it would match our new bisque Whirlpool microwave. It did not. It is slightly off-white, I suppose, if you look at it at just the right angle. But it does not match the microwave, and it is not the color I had envisioned at all. At this point, in retrospect, I should have just stopped the delivery men and kept the Kenmore oven. But I didn’t. I thought at least the oven and microwave were from the same manufacturer and I didn’t really expect there would be that much difference between the two ovens since they were basically the same price and had the same features. I was wrong. There is a big difference between the two ovens. I won’t bore you with all the details, but suffice it to say that I do not like our new oven.

Today, we went to Sears to talk to them about returning the oven. We didn’t get a clear answer on that, since we had ordered the Kenmore online originally, but the saleswoman told me that all bisque ovens are lighter in color than other appliances because of the glass. Gee, that’s something I wish someone had told me before I ran out and bought all these new appliances. But, more devastating, she told me that they are discontinuing bisque altogether. Since our fridge is on its last legs as well, that means we’ll need to get a new fridge while bisque is still available or have a fridge that doesn’t quite match. And our kitchen will most definitely be dated.

I’m bummed, a little angry and confused. I wish manufacturers would put more thought into their product lines. Surely, there must be some way for them to make a bisque oven that actually matches its microwave counterpart. So, why don’t they? And no wonder bisque has gone out of style. It’s what I really wanted for my kitchen, but if I had to do it all over again, I would’ve just gotten stainless like everyone else so I could spend my days endlessly wiping fingerprints and water spots off of my appliances.

I think the other thing that irritates me about this situation is that my options are so limited. I’m not calling for a return to the avocado-colored kitchen appliances of the 60s, but I don’t understand why the only appliances that come in a variety of colors are washing machines and dryers. Is it because when people sell their homes, they usually take their washer and dryer but leave their kitchen appliances behind? Are we all sheep who must buy stainless or be banished to the ranks of the styleless forever? I guess I’m weird, but I actually think pale yellow or sage green or chocolate brown kitchen appliances would look awesome. I could even see a bold red or blue looking really cool in the right kitchen. Why does it all have to be so boring?

What color appliances do you have in your kitchen? Do you love them?

40 Responses to We bought new appliances, and they aren’t stainless