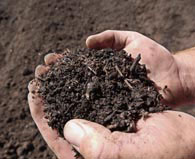 With the warm weather we’ve been having over the last week, it definitely feels like spring. The daffodils are up, the cherry blossoms are blooming, and I am starting to think about what we’re going to do with that mess of a backyard we have. My plan: start my first garden. Step 1: Get some great compost.

We’ve had a bit of an on-again, off-again relationship with composting since our son was born and we moved to a humid climate (think bugs, lots of bugs), but I’m giving it a go again. For one thing, it just seems so wasteful throwing out all those wonderful food scraps or tossing them into the garbage disposal. There are still valuable nutrients in those scraps, but those aren’t put to good use when they end up in a landfill or a water treatment plant.

Well, at least in theory. I’m actually uncertain whether we’ll use our compost for growing our food. I may just use it for flowers and other non-edible plants in the yard. I really want to grow organic foods for our family this summer, but since not everything we throw into the composter is organic, it doesn’t really make sense to spend the big bucks on organic soil and seeds and then use compost that has pesticide residues in it. We could start another compost pile, I suppose, just for organics, but that seems awfully complicated to me at the moment.

So, we’ll have one composter and use it to fertilize the plants in the yard that we won’t be eating. That’s the plan, at least.

There are, of course, many different ways to compost. We like to keep a small stainless steel, airtight container on the kitchen counter for collecting scraps and then we throw it into our NatureMill composter. The NatureMill is a little quirky (some items that you would normally compost like tea bags or newspaper can’t go in it), but it makes composting very easy.

We got it when we were living in bear country and I wanted to start composting. One thing I knew right away was that having a big compost pile outside was not a good idea — for the bears, or for us. So, I wanted to do something indoors. I rejected the idea of doing a bin with worms pretty quickly (crunchy though I may be, I did not want a bunch of worms in our house), so we ended up with the NatureMill.

We bought it a few years ago when I was still working and we had more disposable income, and back when NatureMill had an outlet store on their website where you could buy reconditioned composters. Sadly, they seem to have discontinued that practice. On a positive note, though, it seems like they have improved their composters since we bought ours (they’re supposed to be quieter, hold more and emit less odor — ours makes a low humming noise and emits an earthy smell when you open it, neither of which bother me, but with all the fresh food we eat in our household, a larger capacity would definitely be nice).

One thing that I love about composting is that my son has already taken to it. He helps me “feed” the composter our scraps and dump in the baking soda and sawdust pellets. And when the composter starts turning, I can simply lift the lid and show him the composter at work.

We still have a couple of weeks before our compost will be ready to be used for our plants, but I know that will be a fun project for us, too. He loves working in the yard and the dirt. What fun we’ll have!

Besides the personal benefits I’ve seen from composting, there are broader benefits to society from composting. Food accounts for nearly half of the municipal solid waste that’s sitting in our landfills, but it could take centuries to break down in a landfill, buried among layers of other trash and unexposed to oxygen, which is necessary for compost cultures to survive.

Not only is this a horrible waste, but there are larger problems as well. We’re running out of room for landfills and landfills emit methane — a powerful greenhouse gas that’s 21 times more potent than carbon dioxide, according to the EPA.

Then there are the benefits of compost itself. Compost contains nitrogen, which is difficult for plants to obtain in a form that they can use, and it helps to retain moisture. Using compost from food and paper waste instead of chemical fertilizers also helps to reduce the amount of pollution in our land and water.

There are many different ways to compost. For instance, you can simply leave grass clippings on the lawn and they will eventually decompose and fertilize the soil.

To accelerate the compost process, you can use a heap, compost bin or compost tumbler outdoors. Using these methods, the material must be turned on a regular basis so the outer layers are exposed to this heat. If the material is piled at least 3 feet high, it will generate heat that accelerates the compost process. Most compost bins and tumblers are not big enough to do this, however.

Another common household composting method uses worms in bins. Worms will eat almost anything, they don’t take up much space and they’re fast workers.

But you have to be comfortable keeping worms around. And there are some other drawbacks as well: it’s not safe to add meat, fish or dairy products to your compost pile if you’re using worms and some people have problems with smells or drippings when using worms. 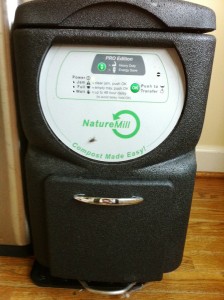 The final household method of composting is using a NatureMill composter. The NatureMill can be set up right in your kitchen, allowing you to collect waste right where you make it. A computer does all of the hard work for you, controlling moisture levels, temperature, air flow and mixing. And it only requires a few square feet of floor or cabinet space and a regular electrical outlet.

The downsides that we’ve experienced with the NatureMill are the noise, the limited capacity, the potential for odors and leaks if the NatureMill isn’t carefully monitored, the limits on what items can be composted and the need to break items down into small pieces for the machine to work effectively. NatureMill appears to have addressed many of these issues (noise, odors and capacity at least) with its newer models.

The other major drawbacks are the cost (prices start at $199) and that it uses electricity. Unless you happen to live somewhere that relies solely on renewable energy sources, this means the NatureMill also contributes to greenhouse gas pollution by using electricity produced from fossil fuels and it will add a little to your electrical bill (NatureMill estimates that it costs only 50 cents a month to operate). 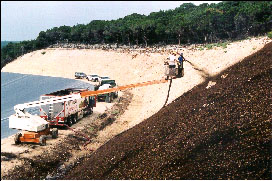 Some municipalities are now starting to accept compost. Municipal composting has the potential to mainstream composting and make recycling food as common as recycling cans, paper, plastics, etc.

Typical municipal composting involves collecting food, paper and yard waste from homes and businesses and hauling it to a large field, where it is sorted and arranged in rows that can be hundreds of feet long. Industrial fans and ducts blow air through the material to improve the flow of oxygen and plastic sheets are sometimes used to cover the rows, containing moisture and preventing odors. Specialized tractors turn the materials and chemists monitor the piles to ensure the process is done safely. Temperatures in municipal compost piles are often hot enough to sterilize the materials, making it safe to include meat, fish and dairy products. When the compost process is completed, the compost can be sold to nearby farms to help offset some of the costs of these programs.

The main disadvantages of this method are the potential to attract rats and other animals at the compost sites and along the collection routes, as well as all the equipment involved in the process. Collecting the compost usually requires an additional fleet of diesel trucks, which produce more greenhouse gas emissions. And the ducts and plastic covers used in these piles are often discarded after a year or two, adding more waste to landfills.

Do you compost? What method do you use?