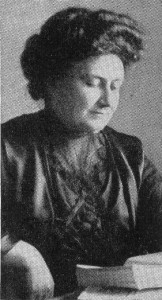 Maria Montessori was born in Italy in 1870. She graduated with a medical degree from the University of Rome in 1896, which was almost unheard of for a woman of her generation. She began working with mentally disabled children, eventually becoming co-director of the Scuola Magistrale Ortofenica, a training institute for teachers working with mentally disabled children. She developed methods and materials there that she later used while working at the first Casa dei Bambini, or Children’s House, which opened in Rome in 1907.

It was from her observations of these children that she developed what would become the hallmarks of the Montessori philosophy, including using child-sized furniture that is light enough for the children to move, placing child-sized materials on easily accessible shelves, incorporating practical life activities such as flower arranging, hand washing and cooking into the curriculum, and allowing the children free choice of the materials and long periods of uninterrupted work. The success of that school led to the opening of more Children’s Houses and to an expansion of the curriculum to include reading and writing exercises.

I won’t go through the whole history of Montessori education, but suffice it to say that from these beginnings, Montessori schools continued to open throughout the world and Montessori herself continued to observe and refine her methods. For example, she recognized four distinct “planes” of human development — from birth to six years, six to 12 years, 12 to 18 years, and 18 to 24 years — and called for different educational approaches for each of these developmental phases.

In the United States, there are two main accrediting institutions — American Montessori Internationale, which was founded in 1929 by Maria Montessori and closely adheres to her original principles, and the American Montessori Society, which has modified Montessori education to more closely reflect the values of contemporary American society.