Warning: This post mentions poop. If you don’t like to read about poop, please don’t read posts about potty training. Thanks! 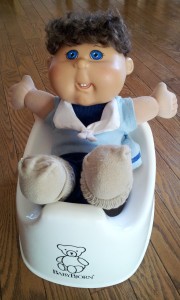 Thomas on his potty

Our two-year-old has been diaper-free except for naps and bedtime for a little more than three weeks now (and when I say diaper-free, I mean no diapers, no training pants and no underwear — naked from the waist down at home and just in pants when we’re out). In that time, we’ve only had three true accidents (meaning where I hadn’t forgotten to bring a potty with us), so I would consider our diaper-free time to have been remarkably successful so far and much easier than I ever imagined. Still, I knew the day would come when we would have the dreaded poop accident while we were out and about. Today was the day.

Our little man was running around and having fun when he suddenly stopped in his tracks. And then I saw it — his poop face. I swooped in to get him, grabbed our bag of supplies and headed for the nearest bathroom. Many baby wipes and a change of pants later, he was ready to run around again. All things considered, it wasn’t as difficult of an experience as I thought it might be. I had everything I needed, I knew where the bathroom was and I caught him in the act early enough that he didn’t leave a trail of poop leaking from his pants. So I’m actually pretty encouraged by today’s events.

I know having a diaper-free baby isn’t for everyone, but I’ve been amazed at how quickly he’s gotten into the routine of using the potty, particularly at home. When he needs to go, he’ll often announce “pee” or “poop” and run to a potty (we usually keep three little potties on our main floor, so there’s one in every room). It has been so much easier than I ever thought it would be.

But when I think about it, I think potty training has gone so smoothly for us because it has pretty much been a lifelong process for our little guy. When he was a newborn, I would sit him on a potty bowl and he would poop and pee right into the bowl while he was having his bottles. It was pretty easy in those days because he went to the bathroom so often. I also put him into cloth diapers as soon as he was big enough to fit into them (he weighed less than 5 pounds when we brought him home from the hospital), so he’s always had the sensation of knowing when he peed or pooped.

Once we survived the newborn phase, I put our potty days on hiatus to focus on other things (like sleep and breastfeeding), so it wasn’t until he was around 10 months of age that I really started doing diaper-free time with him. We’d spend a half-hour or so in the bathroom in the mornings reading books and playing with blocks. I’d scoop him onto the potty when I noticed signs that he was about to poop. Catching pees was much more difficult, so I usually only caught those mid-stream. We did this for many, many months.

By the time he was approaching 2 years old, I started encouraging him to sit on the potty at diaper changes. There were a couple of times where he just sat down on the potty and peed or pooped, but to be honest, we didn’t really have much success with getting him to use the potty on a consistent basis until we got Thomas, a Cabbage Patch Kid doll I picked up at a consignment store. We’d have them both sit on potties at each diaper change, and pretty soon our son was reliably peeing in the potty three to four times a day. That’s when I decided to try our little diaper-free experiment.

By today’s standards, I suppose my son would be considered a little young to be potty trained, but by historical standards, he’s actually a little old. In the 1950s, before the advent of disposable diapers and automatic washing machines, more than 90 percent of kids were potty trained by the time they were 18 months old. My guess is that most of these children had caregivers who worked with them consistently on using the potty because there was a real incentive to potty train them (imagine washing all those dirty diapers by hand — blech.)

I think the predominance of disposable diapers in our society is a shame for many reasons, but a big one is that they delay potty training, which is so important for a child’s development. Disposables may seem like the easy answer because you just throw them away, but they’re really a harder way to go.

If you’ve gone through potty training with your kids, how did you handle it?

One Response to Our first public potty training accident (oops!)