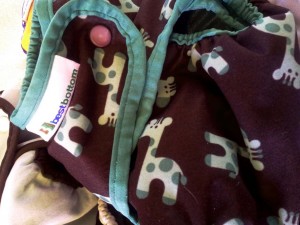 One of the easiest ways to give your child a healthy and eco-friendly start in life is to use cloth diapers instead of disposables. And improvements in the way cloth diapers are made means you no longer have to endure pin pricks while wrestling with a squiggly baby during diaper changes or dunk dirty diapers in the toilet. In fact, today’s cloth diapers have many benefits that make them a popular choice for eco-conscious families. Here’s a quick breakdown of why more and more families are choosing cloth diapers:

Cloth diapers are easy to care for

No more toilet dunking. And you don’t need to throw dirty diapers into a water-filled pail, either. All you really need is a sturdy trashcan and a diaper pail liner or spare pillowcase. If your baby is exclusively breastfed, you can throw dirty diapers right into the pail since breast milk is water soluble. For babies on formula or solid foods, just shake dirty diapers over a toilet and flush the waste away before throwing them in your pail. When you’re ready to wash the diapers, you can remove the diaper pail liner, empty the diapers into a washing machine and throw the liner in with the wash. If you’re concerned about running poop through your washing machine, you can use a diaper sprayer that attaches to your toilet to more thoroughly clean your diapers or use flushable liners between your baby’s bottom and the diaper. If that still grosses you out, simply search for a local diaper cleaning service and let them do the work for you.

The occurrence of diaper rashes has increased more than tenfold as parents have increasingly switched to disposable diapers. Before the introduction of Pampers in 1961, nearly every baby in the United States was diapered using cloth diapers. By 1991, about nine out of ten babies in the United States was diapered with disposable diapers. As parents switched from cloth to disposable diapers, the rate of diaper rashes soared from 7 percent of babies in 1955 to 78 percent in 1991, according to a study published in the journal Clinical Pediatrics.

Most disposable diapers also contain chemicals such as sodium polyacrylate and dioxin that have been linked to health problems. Sodium polyacrylate, the absorbent gel inside nearly all disposable diapers, is a known skin irritant and is banned from use in tampons because of its link to toxic shock syndrome, a deadly disease that can cause kidney, liver and heart failure. Dioxin, a byproduct of the bleaching process, can cause cancer, birth defects, liver damage and skin diseases.

Some studies have also linked to disposables to health problems including asthma and male infertility. A 1999 study on mice found that disposable diapers caused eye, nose and throat irritations and produced symptoms similar to an asthma attack. Another study found that wearing plastic-lined disposable diapers significantly increased the temperature of the scrotum of young boys when compared with cloth diapers. Because temperature plays a critical role in normal development of the testicles and sperm health, the researchers concluded that the increased use of disposable diapers may explain the increase in male infertility problems over the last 25 years.

Cloth diapers are better for the environment

The Environmental Protection Agency estimates that disposable diapers generate about 3.7 million pounds of waste annually – that’s about 27.4 billion diapers, according to the Real Diaper Association, an advocacy group promoting cloth diapers. All those diapers, most of which contain untreated sewage, end up sitting in landfills for hundreds of years. Disposable diapers also use up more resources in their production. A Women’s Environmental Network report found that disposables use 3.5 times as much energy, eight times as much non-renewable raw materials and 90 times as much renewable materials as cloth diapers.

Cloth-diapered babies tend to toilet train more quickly because they can tell when they wet their diaper. By contrast, babies in disposables lose awareness of their natural bodily functions. Before the introduction of disposable diapers, more than 90 percent of children were toilet trained by the time they were 18 months old. Today, most children aren’t potty-trained until they’re about 3 years old. Earlier potty training with cloth diapers not only saves parents time and money, it bolsters a child’s confidence by giving them more independence.

Admittedly, this is a matter of opinion, but there’s no denying that cloth diapers come in a variety of cute prints and colors, whereas disposable diapers are mostly pretty bland. The cuteness of cloth cannot be beat.

By choosing cloth diapers, you’ll be putting less waste into landfills, using fewer resources and giving your child a healthy beginning. Any other diaper is just, well, trash, as far as I’m concerned.

What’s your experience with cloth diapers?

3 Responses to If your baby’s diaper isn’t cloth, it’s trash