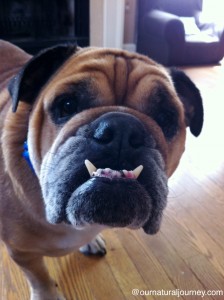 This is a little outside the realm of my usual posts here, since it has nothing to do with Montessori education or natural living, but it’s an issue near and dear to my heart. Plus, it’s on my mind right now because we just added another (canine) member to our little family.

Her name is Lily. She’s a 6-year-old English bulldog. We’ve had her for less than 24 hours, but I can tell already that she is a very sweet dog. Any dog that withstand the antics of our 2-year-old without batting an eye is a sweet dog in my book!

We’re fostering Lily right now, so we’ll be her family until she finds her forever home. When we agreed to take her, the woman who runs the bulldog rescue we got her from warned us that she may be with us for a while. Apparently, there isn’t a great demand for older dogs. Most people who want to adopt a dog are looking for a 4- or 5-year-old at most, not a 6- or 7-year-old, I was told.

Our experience with adopting an older dog

I can understand this to a point. When I first decided that I wanted to adopt a bulldog, I wasn’t thinking of adopting a senior dog. The first dog I was matched with, however, was an 8-year-old female. My first thought was, “Eight years old? She’ll only be around long enough for me to get broken-hearted.”

But I went out to see her anyway, and I’m so glad I did. Her name was Princess when I first met her, although I quickly changed that to Piccadilly. Now, I have to be honest, it was not love at first sight when I saw Piccadilly. She was short, extremely bow-legged and she had a horrendous underbite (even for a bulldog), so her tongue was almost always sticking out of her mouth. This all gave her a rather comical (some would say frightful) appearance.

But as I spent time with her, I realized what a sweet dog she was. I decided to adopt her, and it was one of the best decisions I ever made. She’s still one of the best dogs I ever had. I miss her, I love her, I still remember funny stories about her. She was my first bulldog and she taught me all about them. I learned to walk at a slower pace, the value of a good nap and to endure the less pleasant aspects of bulldog companionship: the gas, the snoring, the slobber, the fur on every piece of furniture and clothing we owned, etc.

As it turned out, we did only have Piccadilly in our lives for about two years. She passed away suddenly, presumably of a heart attack or stroke. It was devastating. But nonetheless, I’m so glad I had those two years with her. She was everything you could hope for in a dog: sweet, loving, obedient, happy, healthy and fun to be around.

I guess my point is I wish more people would give senior dogs a chance. They’re in just as much need of a good home as any other dog, if not more. We’ve adopted two senior bulldogs and they were both blessings in our lives (although bully #2 was definitely more, uh, challenging than Piccadilly).

2 Responses to Adopting an older dog