Home » Family Life, Health and Safety » We don’t own a television

We don’t own a television 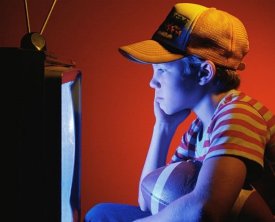 Only 3.3% of homes in the United States are without a television, according to the Nielsen Co. That’s actually up from 1.1% previously (see this New York Times article for the reasons why). We’re one of those TV-less homes, and that puts us in a very small but growing minority.

We didn’t actually set out to drop TV altogether. It’s something that happened gradually. We dropped cable about 5 years ago in an effort to save money. We got Netflix instead. Eventually, we dropped Netflix, too, and survived with rabbit ears on the TV and shows from sites like Hulu on our laptops. Then, TV switched to digital and we got one of those converter boxes they sold for folks like us. We couldn’t get any reception up in the mountains where we lived at the time (is reception the right word for digital TV?). And so, we were down to our laptops.

Then, our son was born and our TV watching declined considerably. Who has time to watch TV when you don’t even get enough sleep? I didn’t want our son exposed to TV anyway, since I know the American Academy of Pediatrics doesn’t recommend any TV for kids under 2 because it interferes with their brain development. When we moved across the country, we decided not to take our old, heavy analog TV sets, which had been collecting dust in the basement, with us. And so, our transformation to a TV-free family was complete.

My husband and I still continue to rely on the free TV shows we can find online (and we’ve noticed the selection isn’t quite as good as it was a few years ago). We watch on our laptops, even though we have large computer monitors, which would make TV viewing more comfortable (for some reason, hauling ourselves down to the basement where one of them is set up in our TV/guest room seems like too much of a chore in the winter, probably because our basement is the coldest part of the house (it will be a refreshing retreat in the boiling summers we have to endure here, I think)).

And so, my son has grown up without having television as anything more than an insignificant part of his life. I happen to think he’s all the better for it. From what I’ve seen, kids’ shows and movies are basically all about marketing junk to kids. We don’t have a collection of toys and other products endorsed by his favorite TV or movie characters, and I’d like to keep it that way.

Our son was sick last week (as we all were — it was a rough week!) and so we allowed him to watch television on a consistent basis for the first time in his life, since it was one way to keep him still and restful while he was awake (our son is constantly on the go normally, so being still is a real rarity for him). It was a little scary to see how absorbed he became in TV. When he’d get up from a nap or awake in the morning, he’d immediately say, “Watch TV.” Not exactly a phrase that made my little mommy heart sing. But he was sick and we weren’t up to fighting with him, so we acquiesced. And he watched TV, more than I would’ve liked.

I was preparing myself for a battle when he got better and we turned off the TV. But surprisingly, to me at least, when he was starting to feel more like himself again, he didn’t even ask about TV. He was back to doing what he loves to do: building with his blocks, playing with his trucks and having books read to him. He was asking about going to the playground and riding his bike. And that really did make my heart sing.

How do handle your kids’ watching TV in your household?

2 Responses to We don’t own a television