I wanted to write a little something today about some of the things we have done in our house to incorporate the philosophy of Maria Montessori into our everyday lives, and I thought the best way to do that was to give you a little glimpse into our home.

Let’s start with my son’s room. These are the bottom two shelves of his changing table. We no longer use it as a changing table (we gave up on that long before he was out of diapers thanks to his squiggliness), but we still use it to hold some of his toys, books, etc. As you can see, I’ve laid out just a few toys for him to play with and he can access them easily since they are on open, low shelves.

The baskets hold groups of items — one for vehicles, another for random items he always manages to pick up along the way, another for his wooden train set (which you can’t see in the photo) and one for his blocks. I also have two puzzles out for him. The baskets on top of the puzzles are for holding the pieces (an idea I picked up from his very brief stint at a Montessori daycare) — this makes it easy for him to put away the puzzles without having to actually fit all the puzzle pieces back into the puzzle. I try to change out the items I have on his changing table, but admittedly I am very inconsistent about this.

A key point in my son’s room is his bed. He sleeps in a regular bed on the floor. At this point, he is on a full-size mattress with a wooden platform underneath. He has been sleeping on a mattress on the floor since he was just a few months old (first with me in his room, then on a mattress next to Daddy and I when Daddy got lonely and we all moved back into the master bedroom, and finally by himself in his own room since he was about 8 months old).

Co-sleeping does not really fall into what I know of Montessori’s philosophy, but it took a while for me to let go of him enough to let him sleep in his own room (in large part because of medical issues he had and my unfortunately futile attempts to get him to breastfeed). But once he was on his own, what a relief! We all slept better, and, with the exception of one horrible afternoon, we never had any problems getting him to stay in bed once we put him to sleep. Even now, he is more apt to call to me to get something for him when he needs it at night rather than getting out of bed himself. 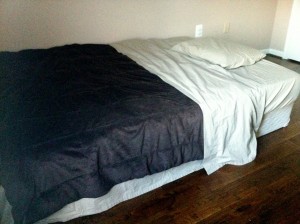 We experimented with many different sleeping arrangements when our son was a newborn before finally deciding to just use a “floor bed.” We put him on a full-size mattress rather than a crib mattress because our son moved around a lot in his sleep as an infant and young toddler. There’s no way he would’ve stayed on a crib mattress. Our son is very active, even when he sleeps.

Although I had read in various Montessori literature that babies can sense the edge of the mattress and will not fall off, I can say this was decidedly not true in our son’s case. Because of this, we cushioned his fall from the mattress by surrounding it with pillows. It wasn’t until recently that we removed the pillows and added the foundation underneath the mattress. I should mention, too, that we fully baby-proofed his room before letting him sleep on his floor bed by himself and purchased a video monitor so that we could keep tabs on him.

On a side note, I personally consider a floor bed much safer than a crib. A nationwide analysis of emergency room treatment released last year found that accidents in cribs and playpens led to about 10,000 injuries and more than 100 deaths each year (the number of deaths is probably actually quite higher, since the researchers only looked at children who received ER treatment). The researchers blamed most of these injuries on infants and toddlers attempting to climb out of their cribs and playpens and specifically on the dangers posed by drop-side cribs. Other studies have shown that crib bumpers pose a significant risk of death or injury for children. A floor bed eliminates these risks. 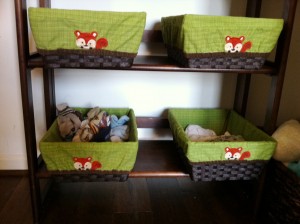 Once again, low shelves and baskets are the keys to my organizing method.

Moving on from the bed, this is a shot of a bookcase I have set up in his closet with baskets for his clothes. I have one for socks, another for underwear and jammies, one for tops and another for bottoms. Aside from the socks, which is well-packed and admittedly a jumble, I just put a few of each item in the other baskets and allow him to choose what he wants to wear. Everything is on low shelves that are easily accessible for him. We’re still working with him on actually putting his clothes on himself, but at least he can pick them out. We also have a hamper in his closet that he can throw his dirty clothes into himself.

One thing we’re still working on and desperately need in his room are decorations. I would love to put some real artwork (or at least prints of real artwork) at his eye level, but it’s one of those things that I haven’t quite gotten around to yet. For now, we just have a few decorations high up on the walls and out of reach — not very Montessori.

I think that’s about it as far as his room. This post has already gotten longer than I expected, so I think I will save the rest of our house tour for another post.

Have you incorporated any Montessori principles into the layout of your children’s rooms?

7 Responses to A Montessori-style toddler bedroom